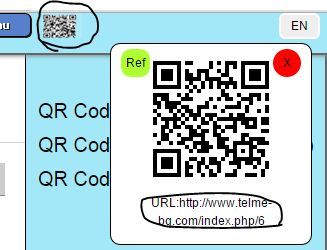 What is a QR code?

A QR code is a two-dimensional code (2D code, matrix code), this means it contains data not only in one dimension (e.g. horizontally from left to right like the barcodes on the products in e.g. your grocery store) but also in a second dimension (vertical and horizontal). The acronym QR is short for "Quick Response".

QR codes are also often called 2D barcodes. However, this notation is not correct, because it means "a two-dimensional code consisting of bars" although a QR code consists of pixels (so-called "modules") instead of bars.

The QR code was invented by the automotive industry. Toyota asked their supplier Denso Wave to develop a barcode to safely and easily identify components. QR generators were originally used in industrial applications. Therefore, they had to be easily printable in form and size as well as staying legible when partially destroyed or dirty.

Like other codes, the QR code symbol can be captured with imaging devices like a camera and then digitally processed. A software prepares the captured image data until it can be algorithmically processed according to the QR code standard so the QR code content can be read. This process is assisted by the use of the Reed-Solomon error correction—which is also used for audio CDs to ensure that the data can still be read correctly even with small scratches on the surface.

Because of the excellent error correction (they can be read even if up to 30 % of the surface gets destroyed) and the high memory capacity (in comparison with other bar codes), the QR code also gained traction outside the automotive industry. Modern mobile phones are powerful enough to run QR code reading software and also usually provide a camera. This combination brought up a variety of possibilities to use the QR code to easily transfer data without typing to the peoples new communication center, the smartphone. Therefore, a widespread use of QR codes became possible with the recent smartphone boom and the increasing spread of mobile internet.

What is a QR code generator?

A QR code generator is a software which stores data into a QR code (for example a text or a website address). E.g. this can be easily done with our online QR generator goQR.me: just create a QR code by typing in your data and download it as high resolution PNG or vector graphic (SVG, EPS). Now you may print your free QR code or embed it on your website to make it available to others.

Are QR codes legally protected? What is the licensing policy?

The QR code developer Denso Wave patented the QR code technology and released the QR specification as an ISO standard (ISO/IEC 18004:2000 and ISO/IEC 18004:2006. However, the patent owners decided not to exercise the rights resulting therefrom. Therefore the use of the QR code technology as defined by the ISO and JIS (Japanese Industrial Standards) is free of charge. Also a usage registration is not necessary.

The name "QR code" is a registered trademark of Denso Wave Inc. in several jurisdictions (including Japan, the U.S. and many European countries). An appropriate notice should be visible when using the brand, is however not necessary if the QR code is only used as a pattern / picture / graphic / logo / icon (e.g. by including it on a website or when printed on a business card, brochure, leaflet etc.).

Nevertheless a word of warning: Please be aware that a QR code image itself may be copyright protected when created by a third party and therefore may incur usage charges or other fees, depending on the license terms of the used QR code generator. Therefore play safe: The QR codes created on goQR.me are free of charge, for both non-commercial and commercial usage, e.g. by advertising agencies. So make sure to always create your QR codes with our generator.

Do QR codes have to be black and white?

No. Most important is a good contrast between the light and dark modules / pixels. Furthermore, a colorized QR code should be no negative (in terms of color, the actually black pixels / modules have to be darker than the normally white pixels) as the dark modules / pixels contain the data and a negative will confuse many QR code readers. You can create colored QR codes with goQR.me for free. Just choose a background and / or a foreground color in the download, embed or shop dialogue.

A barcode scanner (or a mobile phone with camera and an appropriate reader app) which supports the QR code standard is required to scan a QR code. QR code reader apps are made available by different manufacturers and for different mobile devices, mostly for free.

There are many free QR code reader for Smartphones. However, they differ significantly in terms of usability, scanning speed and standards compliance (in particular regarding the processing of vCards). Therefore we provide an overview about recommendable QR code software.

To summarize, there are plenty of free QR code readers on the market. Here are the best ones (from our experience, but we’d like to hear your opinion):

There is no complex rules to make your QR codes easily scanable for rather simple capturing devices such as mobile phone cameras. The most important rules when printing QR codes on everyday materials such as e.g. business cards and letterheads summarized:

The QR code edge length should be not less than 0.6in/1.5cm (when using vCards 0.8in/2cm); the background color should be brighter than the data pixels (no QR negative in terms of color); Sufficient optical margin around the QR code.

What kind of information can be stored in a QR code?

QR codes store binary data. Therefore, possibly all kinds of information can be stored in a QR code. However, the storage capacity of a QR codes is limited to a maximum of 3 kB (using an 8 bit encoding) which naturally limits the possibility to directly store images and sounds. A link to a website which provides the multimedia content normally is the more sensible way to show image galleries or music via QR code.

You can store short texts, SMS, all kinds of URLs and websites (Youtube, Facebook, Homepages), contact details (e.g vCards for QR code business cards, meCard), dates and calendar entries (iCal), telephone numbers, email messages, WiFi access credentials, geo and navigation data and much more. But you have to keep in mind that not every QR code scanner out there is able to process every type of data.

What is Mobile Tagging?

Mobile Tagging describes the process of putting QR codes on real-world objects mark them with some message or connect them to some web page. A smartphone can decode / read the QR code with the help of the camera. The term is a reference to the graffiti jargon term "Tag". See "Mobile tagging" for more information.

How long are QR codes valid? Do QR codes expire?

From a technical perspective QR codes do not expire or get invalid: The information a QR code offers after scanning is stored in the graphic itself (hence QR codes also get larger and form a more complex pattern if there is more data to store). The stored data cannot be changed and therefore a QR code does not "expire" after a certain time.

Unfortunately, there are shady QR code providers and generators, who simply do not store the data entered by the user into the QR code. An example: When you type the web address http://www.example.com, these unscrupulous providers store a redirection address like http://[domain-of-the-provider]/www.example.com into the code without notifying the user about it. So after scanning the code, you’re sent to http://[domain-of-the-provider]/ and redirected to the real destination www.example.com afterwards. The business model of these QR providers normally is to switch off the redirection after a short time frame. So the QR code "expires" even though neither the QR code symbol nor the data it provides were changed. The redirection normally is reactivated after some payment. Sadly, many users are willing to pay because re-printing publicity material, leaflets and things like that often costs more.

QR code on this site